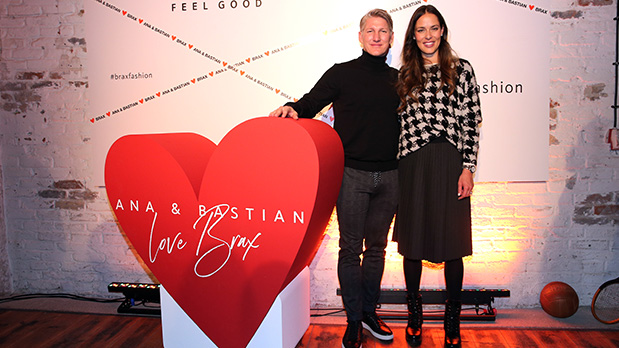 OUR DISTINCT VISION, CLEAR POSITIONING AND FIRST-CLASS PRODUCTS WILL MAKE US THE MOST SUCCESSFUL EUROPEAN BRAND FOR PREMIUM CASUAL CLOTHING.

In our interactions with our partners, we ware trustworthy, transparent and fair. Modernity, a clear approach and a personal touch are the hallmarks of our work. Instilling individuality is an important corporate goal. Our international mindset and our will to succed are the keys to our future. Human resources development and individual career planning secure potential and give motivation for tomorrow. We feel a sense of responsibility towards our suppliers, producers, service providers and customers. 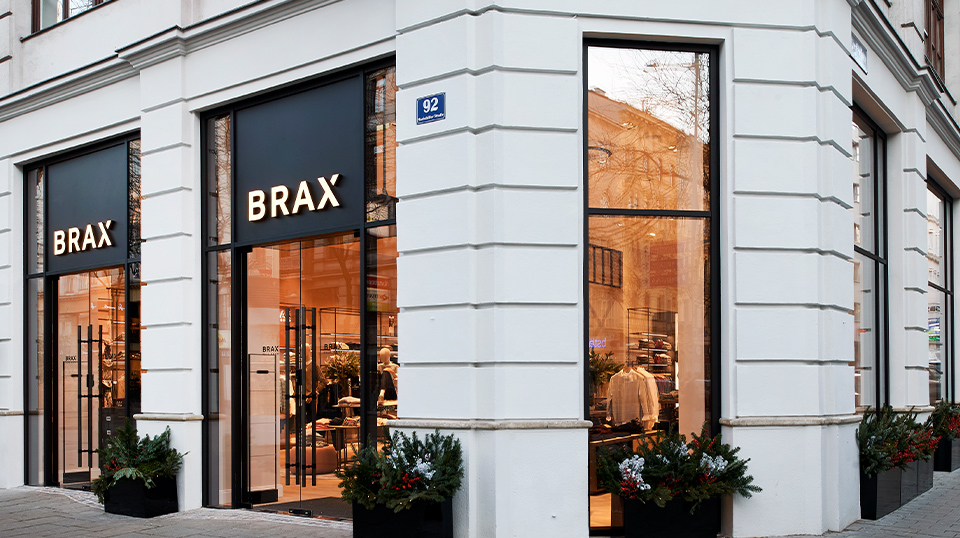 MORE THAN 125 YEARS OF SUCCESS 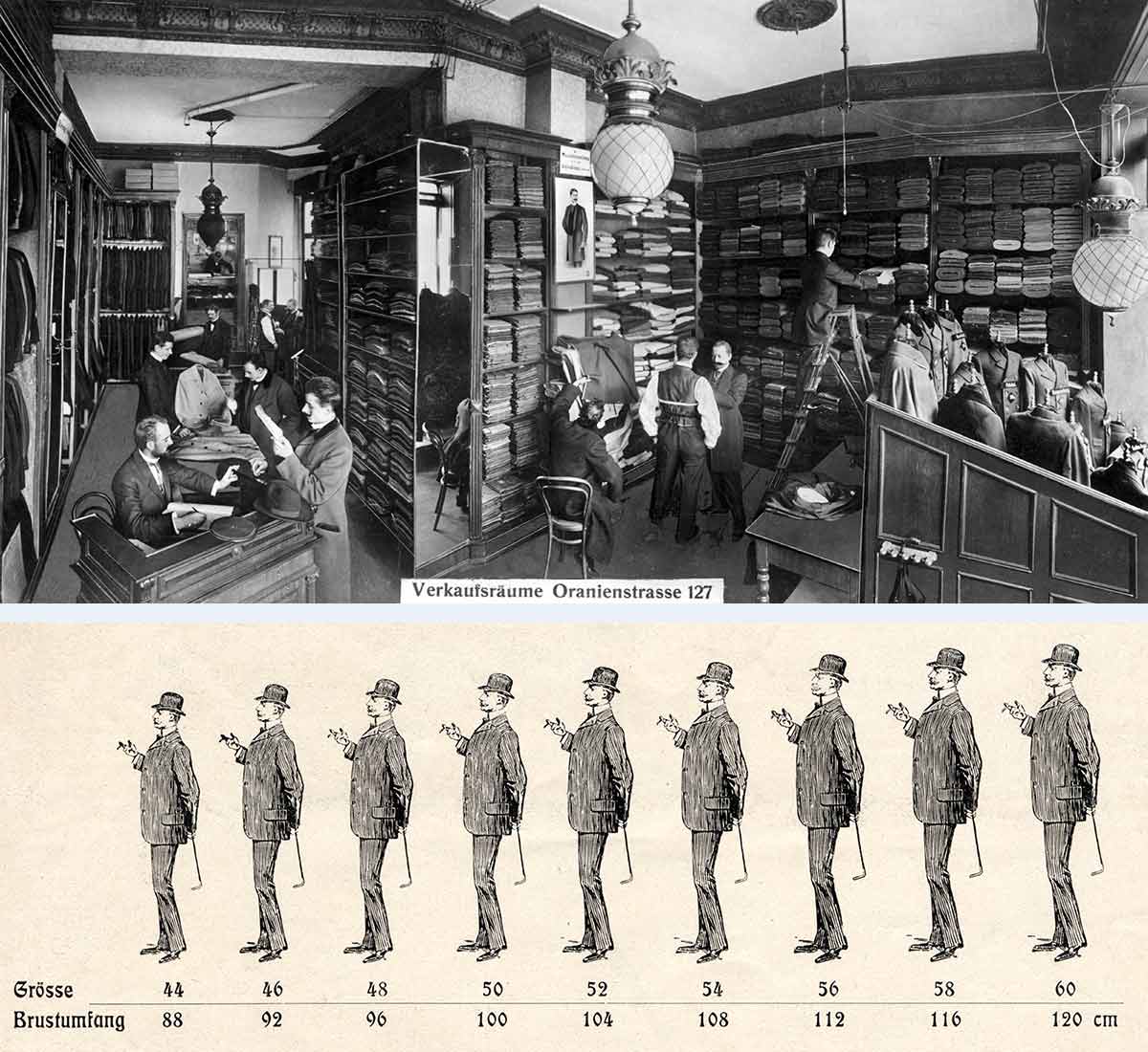 Master tailor Bernward Leineweber and his wife Mary were fully in line with the trend when they opened a specialist store for men’s ready-to-wear clothing in Berlin in 1888. “Off-the-peg” menswear garments were becoming more and most popular. Business developed well. Its goal was to continuously improve the fits in order to be able to offer ready-to-wear clothing for everyone. Every child in Berlin was soon familiar with the name Leineweber. With the beginning of the mass production of bicycles, Bernward Leineweber saw sportswear as a market of the future and manufactured skiing trousers, skating skirts and motor vehicle driving outfits. The company survived the first world war through military tailoring and alterations work. The Great Depression brought the company to its knees: in 1932, Bernward Leineweber GmbH stopped all payments. 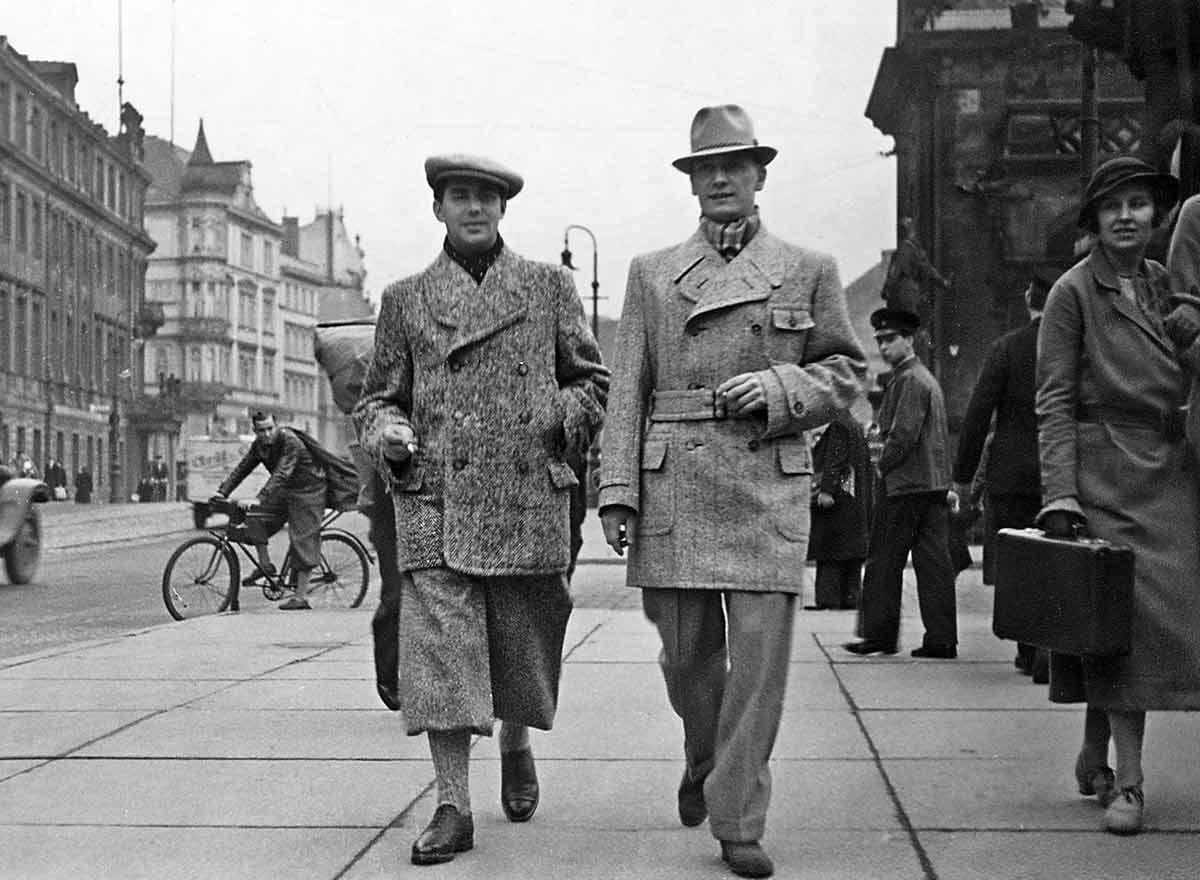 In August 1932, Herbert Tengelmann, owner of Vereinigte Kleiderwerke AG in Herford, took over Bernward Leinweber GmbH. The young entrepreneur concentrated the company’s own production in Herford, but built on Berlin as the location for the retailing side. From the mid-30s, the “Haus das Jeden anzieht” (“House that dresses everyone”) experienced a flourishing phase. The Leineweber coat “Der gute Kamerad” (“The Good Companion”) was one of the core products. Men’s suits and women’s fur coats ensure growing sales. In 1937, Herbert Tengelmann also opened a department for women’s fashion for the first time on an area of 4,000 m². At the beginning of the second world war, Leineweber was also called upon to manufacture uniforms. 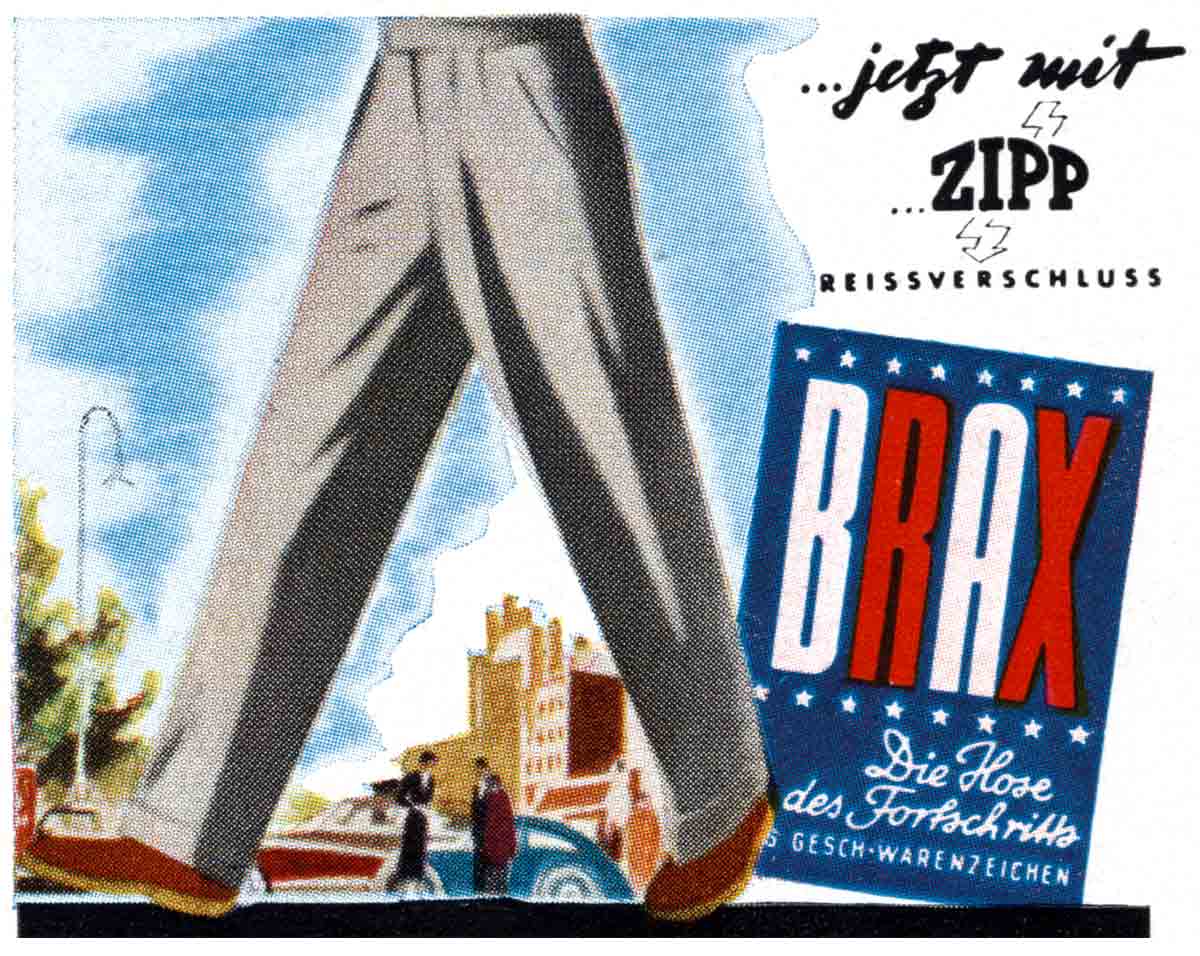 To a large degree, Leineweber had overcome the consequences of the second world war by 1948. Reconstruction had been successful and the upswing began: the first new branches opened in Berlin and Bielefeld. In 1950, Leineweber launched the trousers brand BRAX. “The trousers of progress” for “discerning customers of all tastes” became the motor of rapid growth. A short while later, Leineweber also offered BRAX trousers for women and added Germany’s first trousers with a zip fastener in 1960. In 1959, Wolfgang Tengelmann took over company management. Its growth continued. The late 60s, Leineweber was confronted with the repercussions of a recession and the growing pressure of imports from low-wage countries for the first time since the Federal Republic of Germany had been founded. Retailers continue to flourish, but production finds itself facing a crisis. 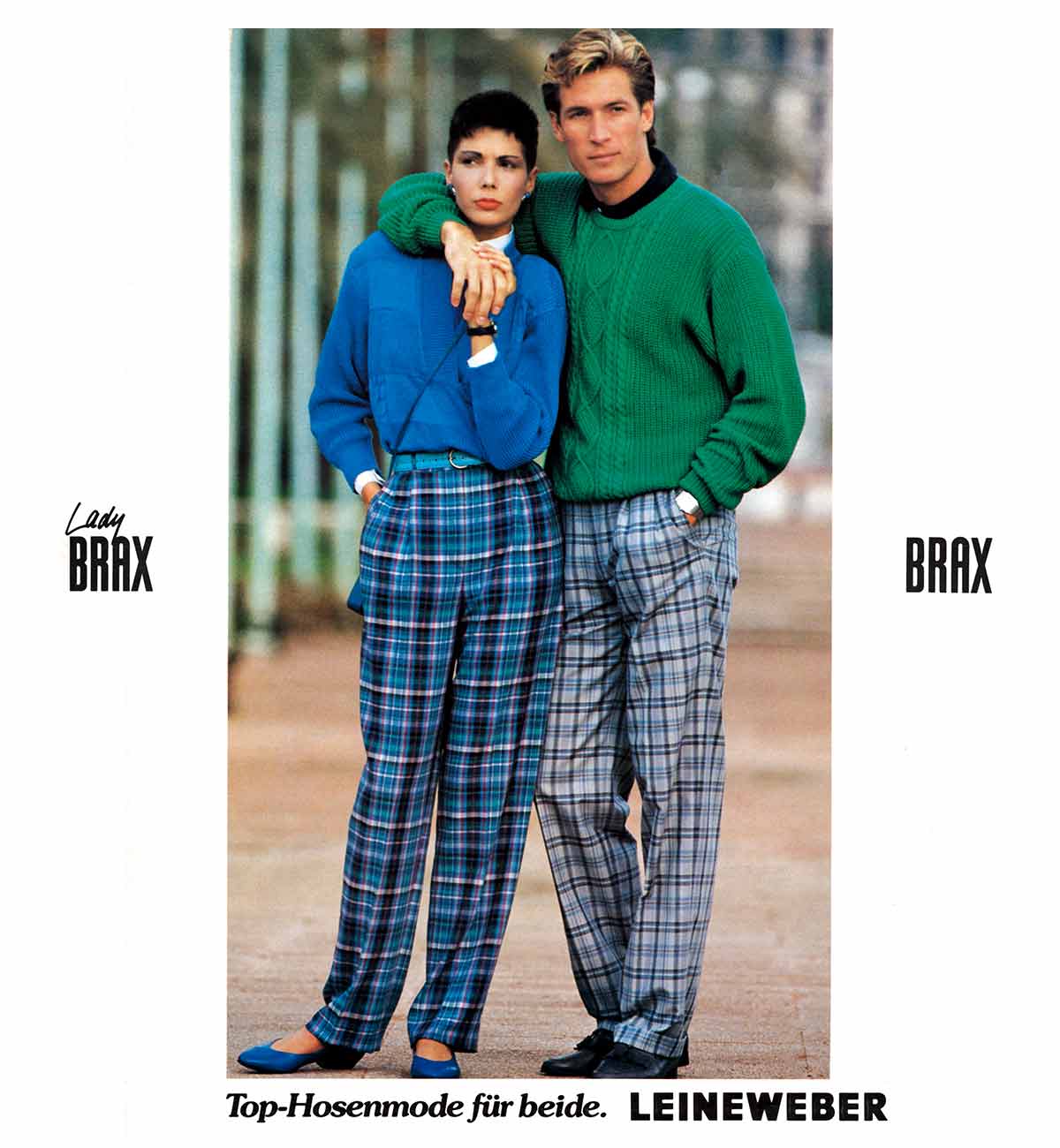 At the beginning of the 70s, Leineweber further extended the brand BRAX and developed itself into a trousers specialist. 1979 a phase of modernisation at all levels began with the takeover of company management by Sigurd W. Gräf and Wolfgang Drewalowski. With its core brand BRAX, Leineweber had something special. In view of growing product variety, brands serve as an orientation for the customers. Due to the guaranteed fit, the customers associate “feeling good in every situation” with BRAX. After the “second economic miracle” that was expected after German reunification in 1990 failed to materialise, Tengelmann fundamentally restructured the corporate group and sold off all retailing stores in 1993. Contracts were drawn up with top department stores such as Kaufhof and Munich-based Konen. For communication with the final consumer, BRAX provided the specialist retailers with prospectuses, stand-up displays and other advertising materials and, despite the continuing economic crisis, recorded a turnover increase. 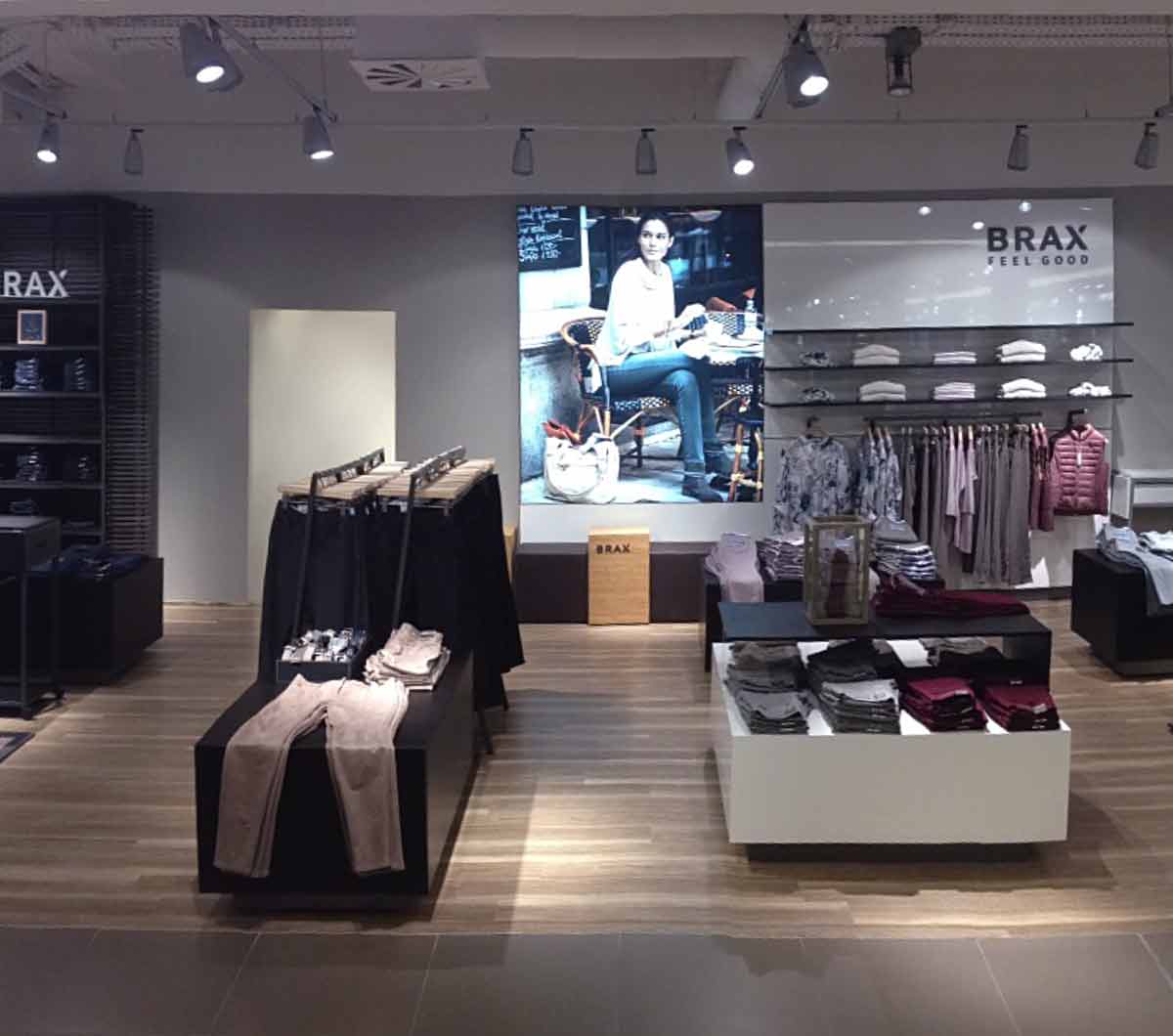 After selling off the retailing stores, BRAX Leineweber reorganised its sales structure in Germany. New strategies such as the Shop-in-Shop system intensified the partnership-based relations to specialist retailers. The first trousers-only Shop was opened at Bruns in Oldenburg in 1997. With the fully automated logistics centre opened in Herford in 1998, BRAX Leineweber again established new standards in logistics and quality assurance. Furthermore, a staff department for quality management was set up at the Herford headquarters. It ensures that goods procurement, supply, production and customer service are optimally matched. In the year 2000, the company started a branch relaunch: the slogan “BRAX Feel Good” communicates a positive feeling for life and the emotional value for which the brand stands.

At the beginning of the new century, the brand BRAX stands for high-quality garments, class-leading manufacturing quality and a perfect fit. The introduction of the knitwear collection in autumn 2003 was an absolute success. Shirts and women’s jackets followed in 2006. In 2007, the first BRAX Stores were opened and in September 2009 BRAX launched its own online Shop. Investments in the field of logistics and the launch of a major consumer campaign are further milestones on the way towards becoming the most successful brand for premium casual garments in Europe. New modules such as social media and company apps supplement online communication. At the beginning of 2013, BRAX presents its own pocket collection to make the premium look perfect. 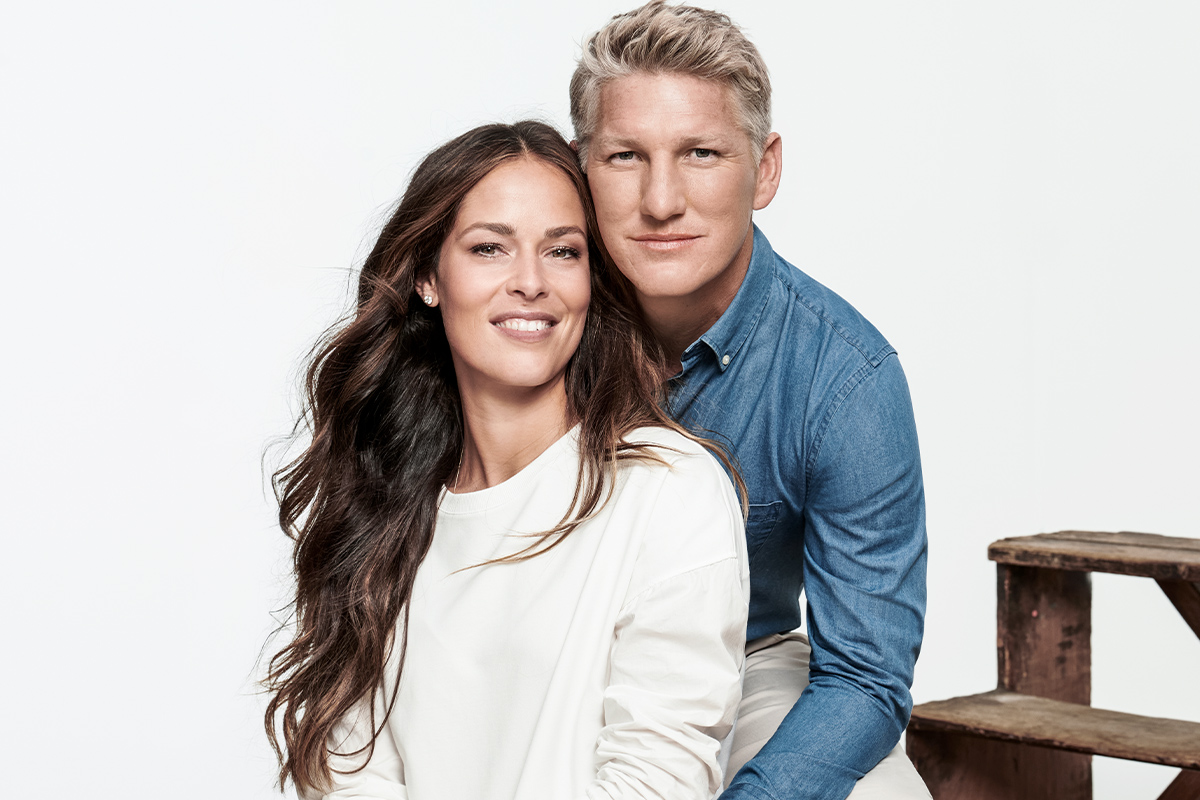 For the first time in the company's history, BRAX is running TV ads in 2017: seasonally almost 600 prime-time placements on private and public TV. In 2020, the company pulls off a special coup by enlisting Ana Ivanović and Bastian Schweinsteiger as celebrity faces for BRAX. The internationally renowned top athletes are bursting with energy and joie de vivre and are the perfect ambassadors for the BRAX brand values smart, stylish and passionate.